Journey into the eternal ice: | AUSTRIALPIN

Journey into the eternal ice:

He did it again! At the turn of the year 2018, team athlete and polar expedition expert Christoph Höbenreich and his two expedition partners ventured on a new project in polar new grounds for 2 weeks and traveled one of the least known and least explored high mountain regions in the world: the Holtedahl mountains in Dronning Maud Land in East Antarctica. In this interview he tells us about how (cold) it was there, what he experienced and which unforgettable moments he came back home with.

Christoph, the first and most important question: Why Antarctica?

Antarctica is the continent of records: The most southern, remotest, most desert, snowiest, driest, coldest, windiest and most peaceful continent. For today’s mountaineers, the high mountains of Antarctica are comparable to the Himalaya in the 1960s and 1970s: There you will find high mountain ranges and massifs that no one has ever been to, not to speak of having explored it. Whoever exposes oneself to this area with skis, a sleigh and a tent, will be fully on his own in the biggest ice and snow wilderness of the planet. There you can discover new grounds, satisfy your curiosity and experience solitude.

The typical question, which is exciting in this case: What was the weather like? And what did you actually eat?

All in all, this year, the Antarctic summer was good to us and gladly, we were spared from a heavy katabatic storm. Katabatic storms are heavy downslope winds which occur without warning when icy cold, heavy air from the central Antarctic plateau flows down to the continental margins, where it is accelerated to over 100 km/h due to icy downward slopes and jet effects. We had wonderful Antarctic weather with relatively nice -15°C during the day, but bitterly cold -30°C at "night". We also experienced a white-out and even some centimeters of fresh new snow with the driest powder – an absolute rarity in central Antarctica. Our food consisted of dehydrated expedition food on the one hand, but also high-energy food such as Speck, Parmesan, dry bread, chocolate, nuts and dry fruits on the other hand.

How would you describe the are you traveled through and which summits did you climb?

Dronning Maud Land and its subregion Neuschwabenland are a real dream land. Here, gigantic rock towers break through the massive Antarctic ice shield like huge cathedrals or rockets. Many mountains have no name, most have never been climbed. We managed to circuit the northern Holtedahl mountains with our skis and polar sleighs and to climb 3 beautiful summits, two of them as the first humans ever. Because of their shape, we named them “Schneekrone” (“snow crown”), “Schneeglocke” (“snow bell”) and “Würfel turm” (“cube tower”). 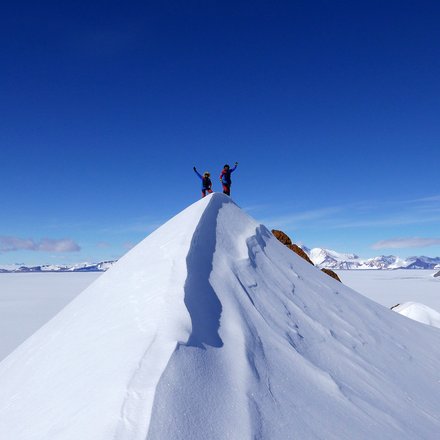 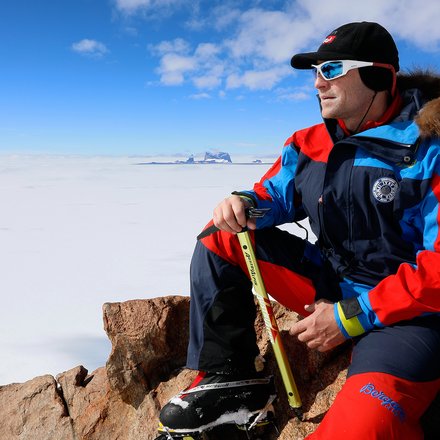 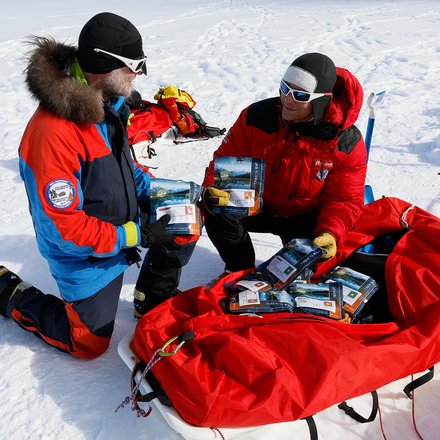 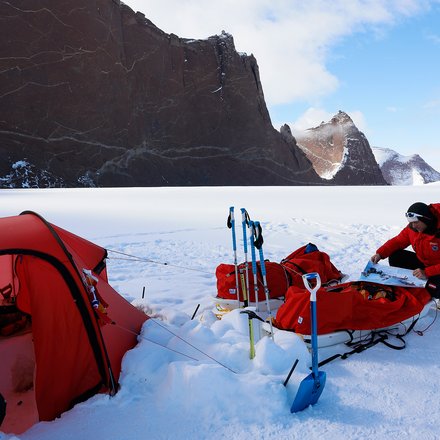 What was different than usual on this expedition? Did you have any unforeseeable problems?

It is exciting to first check possible routes at home with the help of photos of previous expeditions and satellite and aerial images and then go out and see “for real” whether and how it is possible. Of course, you need a lot of intuition, instinct and experience. But even with the best preparation, there can still be surprises, nice ones and unpleasant ones. Antarctica still has a lot of secrets for generations of mountaineers, which wait to be discovered.

Were there any special incidents during your expedition?

Despite the perfect preparation with all the maps and aerial images as well as a careful route choice, this year we were surprised by a huge maze of gigantic crevasses in a completely flat glacier. Lying on my stomach, I was crawling to a crevasse which was open only for some decimeters and which wasn’t even really visible on the surface. I dared to look down and I froze. This crevasse was about 30m deep. Sidewards, the glacier opened up and all I could see was black. Then a storm with heavy snow fall came up and visibility got more and more limited. So we had to put up our tent on a safe ice island, surrounded by countless, criss-cross-running crevasses. As soon as the storm had passed the next morning and the freshly snow-covered glacier glistened peacefully, we needed to find a safe way through this mine field step by step and probing 3 times each to get back to our starting point. Luckily, I had my avalanche probe with me attached to my wrist, so I was able to kind of take a look below the snow cover and get us out of this invisible monster in a zigzag. The dangers of the ice and the cold are obvious. With enough caution, experience and equipment you can protect yourself against it quite well. But what nearly no one expects is that the biggest danger in the ice is fire. If you use a petrol stove in the tent at up to -30°C, you really have to be careful. A torched tent is not only the end of the expedition, it means an absolute danger to life.

What makes an expedition in Antarctica so special and maybe even especially difficult?

In the Antarctic midnight sun, you have enough time and don’t have to be afraid of getting into the dark during a mountain tour. However, you have to be very careful with every step you take, because there is no mountain or air rescue which could help you in case of an emergency. Also, there are no marked paths, signposts or mountain shelters of course. The best preparation, health and equipment which you can rely on for 100% are a must and go without saying. What you also definitely need are team spirit, flexibility and joy to climb mountains without names, which no one knows, but which make possible the most intense mountain experiences in total solitude. I think that probably only astronauts who discovered the moon could have felt more exposed. 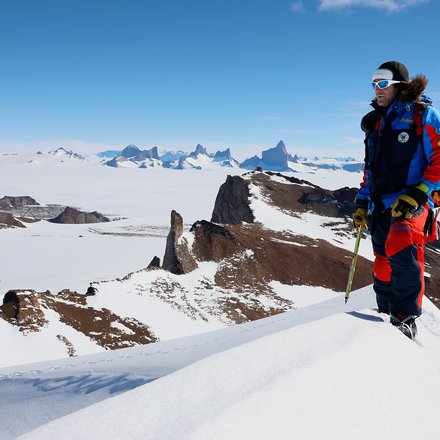 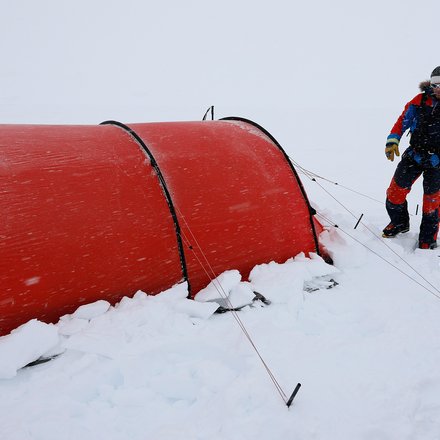 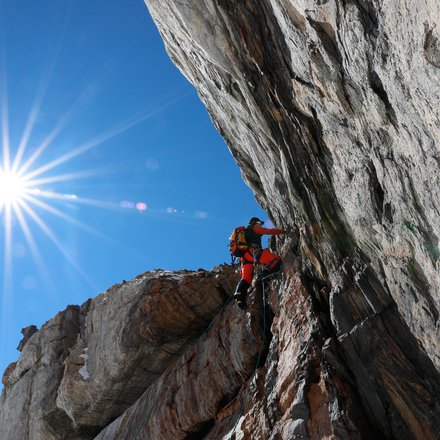 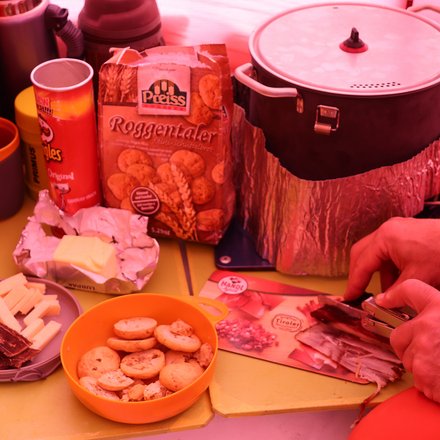 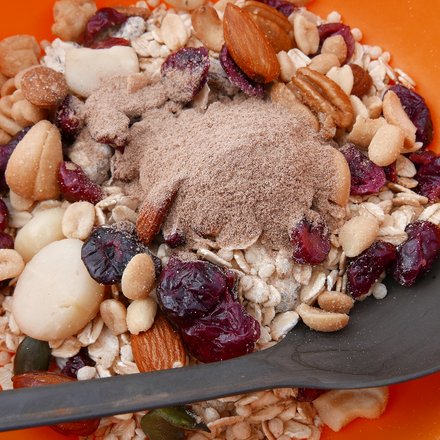 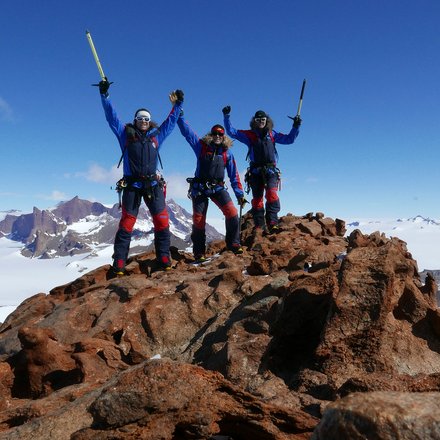 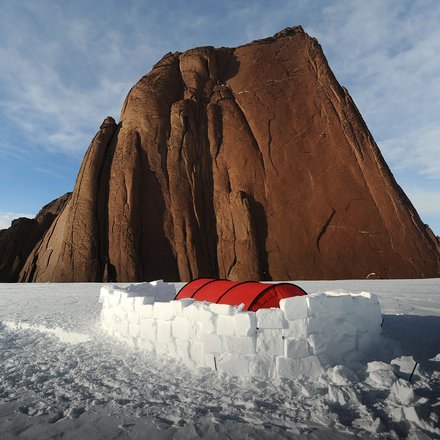 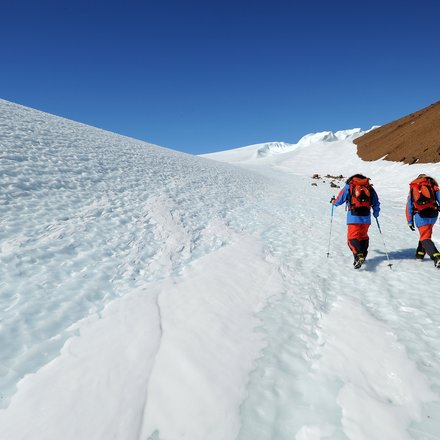